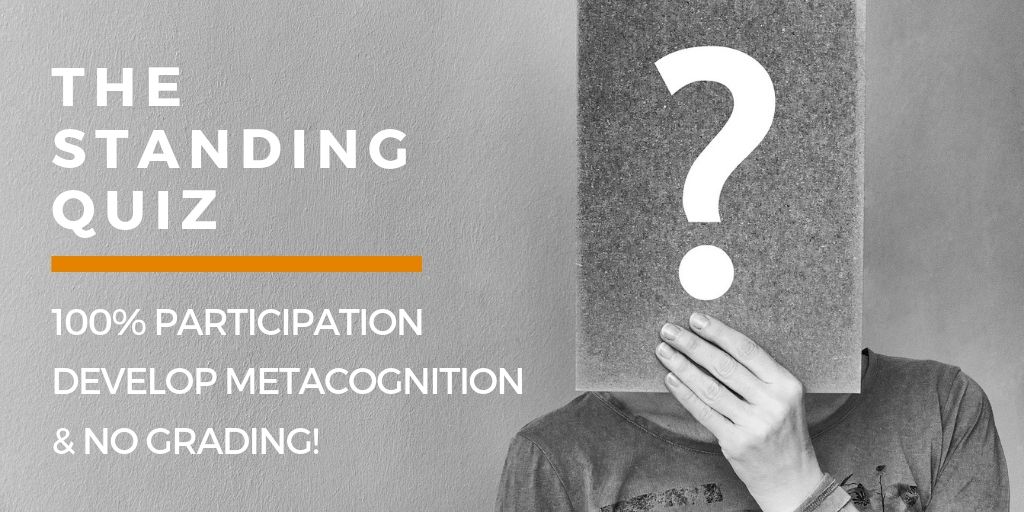 The Standing Quiz: Get 100% Participation, Engage Student Metacognition, and Grade None of It!

What if I told you that there is a classroom activity that . . .

Years ago, I attended a summer training for the Advanced Placement English Language and Composition (AP Lang) course I was teaching at the time. My instructor, Chris Baldwin, delivered incredibly helpful content and perspective all week long, and I walked away a better teacher. The majority of his teaching remained specific to AP Lang, but he taught us a few strategies that are transferable to other subjects, and the one that I am going to describe here is broadly applicable in all subject areas.

Baldwin called it “The Standing Quiz” because students were to be given a portion of the multiple choice section of a practice AP Lang exam and they would stand up to demonstrate which answer they chose. While standing, he would call on students to share their thinking and record who shared. That’s pretty much it. Even though it’s a simple activity, it’s incredibly effective. Let’s take a look.

Here’s a breakdown of the steps:

The first year that I tried this with my AP Lang class, after the exam in May, I surveyed the students asking them what helped most in their preparation. Many who struggled initially with multiple choice at the start of the academic year suggested that The Standing Quiz was the activity that helped them the most. They claimed it helped because they were able to hear their classmates’ thought-process, especially how classmates selected certain answers and how/why they avoided distractors. Essentially, they had access to their classmates’ thinking that they previously didn’t have (unless they were friends who debriefed after a test, and even then they didn’t go over each question).

The one caveat to their reflection that is worth mentioning is the discomfort some students experience. For each student who found hearing the metacognitive thought-process of their classmates, there was a student who was uncomfortable with that moment of standing up and revealing to the whole class the answer he or she chose in response to the question at hand. What if this student was the only one who chose this answer? And what if it was obviously wrong to everyone but this student?

With my classes, I work to make the environment as supportive as possible for all of my students. I can help them get past those awkward moments–even when they will experience that feeling of embarrassment–by reframing the experience as an opportunity for feedback and encouragement from everyone in the room. Yet after doing this activity for a couple of years, I wanted to find a way to get students to reveal their metacognition while taking that spotlight-type feeling off of each person and reducing the amount of class time spent on the activity itself (a 12-15 question multiple choice practice can eat up an entire class period).

What I liked about the activity:

There were two great features from The Standing Quiz that I absolutely wanted to keep moving forward: first, students hearing one another’s metacognition (especially the thought-processes fellow classmates used in deciding how to respond on a multiple choice question), and second, the whole-class formative feedback given about how they were doing on practice exams.

After conferring with a colleague, we decided to test run a new version of The Standing Quiz that essentially functioned in the same way as the four corners classroom discussion activity (not sure what that is, then check out this very brief video tutorial). Instead of labelling each corner on a spectrum from “strongly agree” to “strongly disagree,” we decided that each corner would be a possible answer: A, B, C, & D. Of course, being an AP Lang class, we needed a space to represent the letter E for the fifth option in the multiple choice exam, so we made a made a sign that we placed in the center of the classroom.

Here’s a breakdown of the steps:

I immediately liked this iteration of The Standing Quiz far better than the first version. All students were moving at the same time (which I want to happen as much as possible in class period), I could see visually how the class as a whole responded to each question, and there was far less tension in the air because everyone was already standing (no one felt alone or singled out).

Each time I did this activity with students, I would find more ways to shave time while keeping, and expanding on, the features that I loved so much in the first iteration of The Standing Quiz.

Eventually, I grew skilled enough with this activity that I could finish a 12-15 multiple choice practice in 30 minutes, which gave me enough class time to work on another element of the course. Though, if I needed to give a class period to this activity, it would be a good use of everyone’s time. In addition, as their teacher, I was able to see which questions the students were struggling with the most while hearing their thinking behind their responses. This information was invaluable to me and told me far more about “what they understood and still needed to learn” than I ever would have inferred through running scantrons and talking with other teachers about the results.

Why make the students walk around? Can’t you just use some online polling app to collect all the data?

Perhaps this thought came up as you were reading. Maybe the idea of students wandering the classroom makes you a bit uncomfortable, and you may have students who would struggle to handle this activity with maturity. If you’re concerned about the safety of your students, then using an online polling app like Kahoot is a great alternative to having students move around the room. But the benefits of movement on cognitive function is picking up steam in the research community (see Michael Kuczala’s TEDx Talk “The Kinesthetic Classroom: Teaching and Learning through Movement”). It would be of a greater benefit to your students to get them out of their seats and moving during this activity, not only cognitively, but it may also help them with retrieval later on.

Other Ways to Use The Standing Quiz During Classroom Instruction

Exam practice need not be the only reason for using The Standing Quiz. This is an activity that can be applied in several other scenarios.

Break up a lecture

If you’re a teacher who values traditional lecture with note-taking, then using The Standing Quiz to break the lecture into three or more parts can help students to better retain information. Taking notes is proven to increase learning (see more about this here), and is a natural fit for a lecture (though this is not the only time when students should take notes). But, just as it was mentioned in the TEDx Talk linked above, after an amount of time sitting and doing the same activity, a student’s brain is signaling his body that it’s time to power down. What if every 10-12 minutes there was a slide that asked students to turn over their notes, stand up, and answer a multiple choice question? The students then go to the corner that represents their answer and the teacher can cold call students to respond with their thinking.

This activity becomes a form of retrieval practice (learn more about this strategy here) that increases the likelihood that the information will move into longterm memory, and they will be able to recall the information on the day of the exam. It is also a great way for the teacher to check for understanding without having to do Exit Tickets or hand score a quiz after the students have left the classroom. If the students are misunderstanding the material, this can be cleared up on the spot. And it has the added benefit of resetting the brain through movement, so that when students resume note-taking moments later, they are more attentive.

If you have a two part lesson, this is a great opportunity to use The Standing Quiz. With lecture, I would break it up one question at a time spread out over the course of the lesson. Here, I would apply the same practice, but would stack three to four questions together as part of the transition. The benefits and practice are the same as in the case above, only the deployment is different.

Let’s say that you are in the middle of a unit, you have been working on retrieval practice with your students, and the summative assessment is looming. You want your students to be ready for upcoming test, and you want to see what your students can recall without giving them warning. Looks like a pop quiz is in order! But instead of hand scoring it on paper, use The Standing Quiz.

But instead of simply presenting multiple choice questions that cover a lower depth of knowledge, crank up the rigor and pose very difficult questions that will cause students to recall with effort (which will strengthen their long-term memory; see more here). Consider adding this wrinkle: when you cold call students to explain their thought-process behind choosing their answer, invite those listening in other corners to change their answers. This presents a slight shift in the pop quiz from recall into argument, which gives students another way to process the information.

[Note: In all the scenarios listed above, be sure to aid students in their thinking if they are in error. When novices express their reasoning with confidence (known as the Dunning-Krueger Effect), especially when classmates see these students as experts, then students may recall the errant thinking instead of the learning presented by the teacher.] 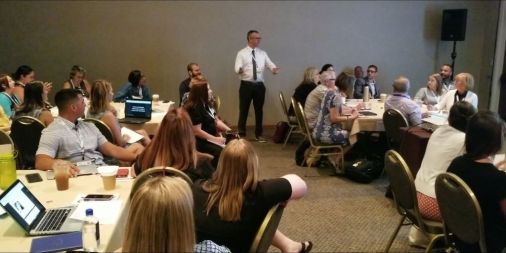 Before you go, I wanted to inform you that offer presentations and workshops for teachers, and I would be thrilled to come present to the good people in your organization. Above is a picture of me presenting at the National School Transformation Conference to room full of teachers, principals, and district-level leaders. See what I have to offer ==> HERE <== .

QUESTION: What are some ways you get students to process their thinking aloud for their classmates?

8 thoughts on “The Standing Quiz: Get 100% Participation, Engage Student Metacognition, and Grade None of It!” 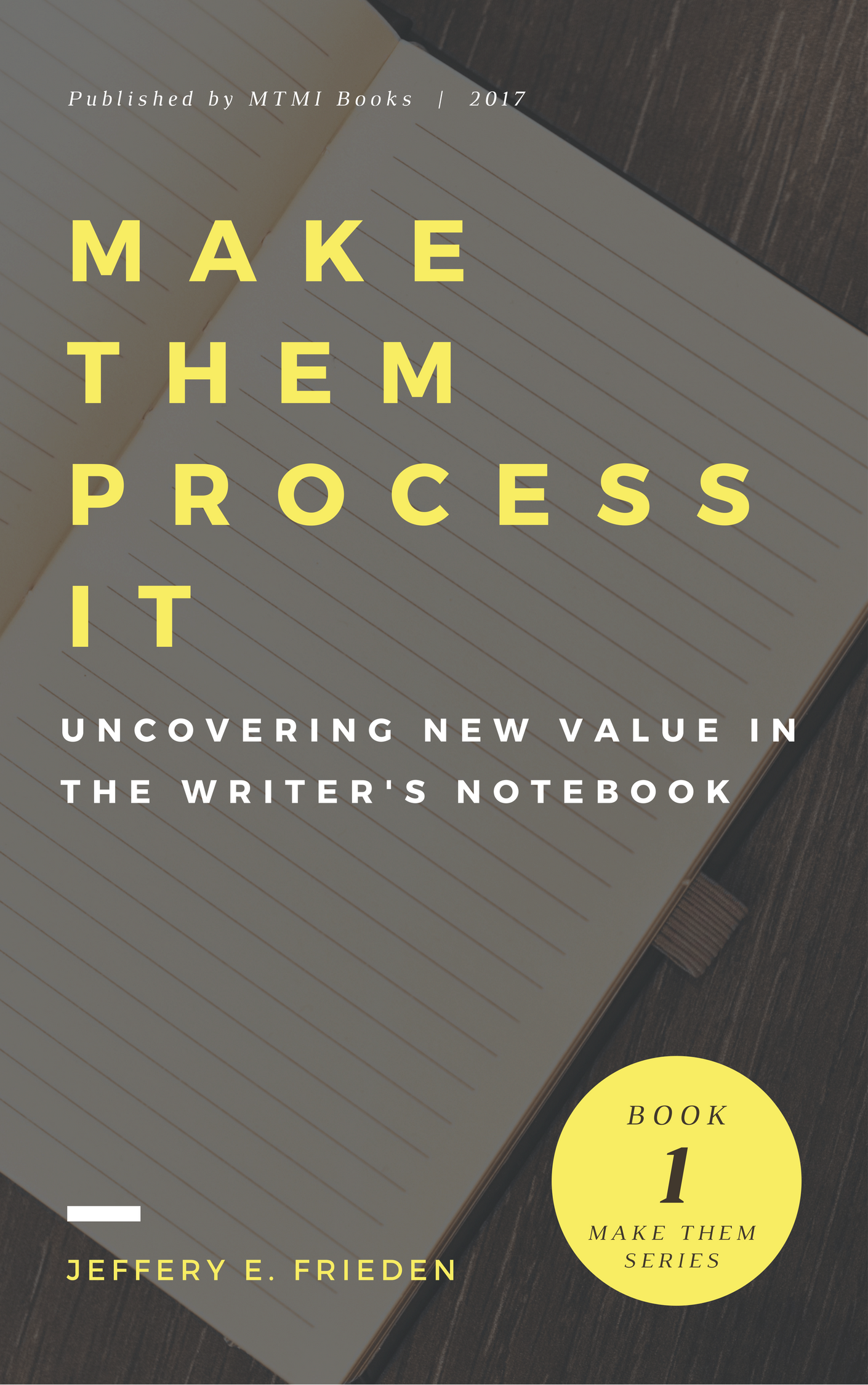